Posted by aebarschall at 10:56 AM No comments:

I've taken a couple of these polls recently where they ask you what issues are important to you.  These polls have been on progressive websites.  I've been short of shocked that they don't mention reform of election law -- given the nightmare we've been through recently.  Here are some possible points


Posted by aebarschall at 10:36 PM No comments:

So I'm having a discussion on FB messenger about Tulsi Gabbard. I decided I want to memorialize it here. I'm not going to repeat the words of my interlocutor, just my words.

This was about Tulsi Gabbard's stand on Syria, her visit to Assad, and her cautious statements about the standard story of who used chemical weapons there. It might be a little hard to follow without his words in between, but I hope you will get the idea. I'm adding some things in square brackets to clarify. I am preserving the structure of the message bubbles in the conversation -- even tho, perhaps, proper editing would suggest combining some of these into paragraphs

There are serious questions of who used the chemical weapons


But the point is that we can't help these countries. That's been clearly established in Iraq and Afghanistan. Our military intervention causes enormous suffering, but does not cure the problem.

We can't help the Syrian people by escalating the war

Remember that the corporate media smears people who are against war. They're part of the military industrial complex

I think there is reason to doubt our government's characterization about what is going on in Syria. They lied to us about Iraq. I don't know that journalists are actually able to investigate this properly, in view of ongoing hostilities

However, I find the US holding chemical weapons while condemning others for using them hypocritical. We dropped napalm and agent orange on Vietnam

Yet, ultimately, the devastation we wreaked there had no positive effect

We need to remove the log from our own eye first

As to what happened in Syria, I sympathise with Tulsi for doubting

She went there. She listened to Assad. She made her own decisions as to what to believe.

She was a nurse in Iraq. She saw first hand what happened there. She doesn't want that to happen again. I agree

My dad came here as a refuge from the holocaust. We bombed Germany, but refused to take refugees [my dad was fortunate to get a student visa]

We fight in Syria. We refuse to take refugees

I don't know that she believed him [Assad]. But she has doubts.

Granted, I think Obama [who started our involvement] was far more moral than Trump, but that doesn't mean he didn't make any mistakes [e.g. Possibly about chemical weapons]

We have no moral high ground to stand on here. That is false

Yes, brutal dictators are bad, but what we're doing to the people in the countries we attack is far worse

War is the greatest human rights violation, aside from genocide

What we did to Vietnam, to Iraq, to Syria is far worse than their governments' abuses
I'm not saying that dictators are good. I'm saying that our military invention is worse, that we can't help those people by intervening militarily. We overthrew Saddam Hussein and instituted violent anarchy.

My dad's laboratory in Madison was bombed by student radicals in 1971, who claimed to be trying to achieve peace. They missed the Army Math Research Center and hit my dad's laboratory instead. A student was killed. My dad had to be forcibly restrained from entering the ruins to look for other students. Finally, the fire department went down, and found Dave Schuster under the rubble, still alive, though injured.

My dad had no offsite data storage. 25 years of the records of his research were destroyed, research that was part of the basis of the cloudy crystal ball model of the atomic nucleus.

I have no sympathy for self righteous bombers

The fact that we've had a good government, at least for white people, domestically, doesn't justify our bombing countries with a worse domestic government. That's nonsense.

Our international behavior has been, in many cases, execrable

Boy in the Window

Here's some information about a show I just completed


This production was only 3 scenes from what is going to be a full length musical, ultimately.

Cast interview with me:


This is the ad for the show on New York Festival Site
http://newyorktheaterfestival.com/boy-in-the-window/

Gofundme for this show here If you can't go, it would be particularly helpful if you could donate, because they're going to have ongoing workshops as the playwright works on the script

Previous blog about this show

Boy in the Window Staged Readings


Cast for this summer 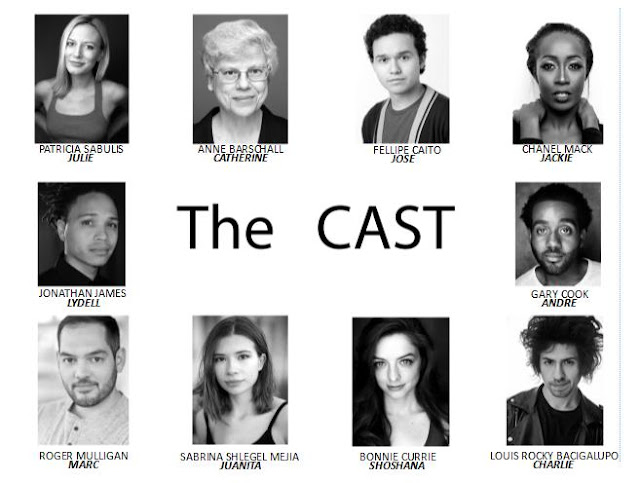 Why you should see this show:

This is an intriguing look at a young, gay, black man trying to find himself. It's actually only three scenes from what will be a full length rap musical.I find the selection of characters from the urban landscape fascinating. Also the rap fugue that we're going to do is beautiful and moving.