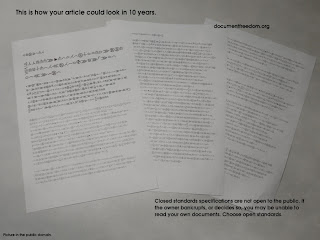 I had an old computer around running Windows that had died of a virus.  I had already paid twice to revive it, $200 a pop; and did not want to pay again.  We decided to install Ubuntu on it.  Then we wanted to add a wireless card, so we could interface with our wireless router.  We bought a netis WF-2117.  It doesn't work.  I contacted them.  They say they only support Windows.  Frustrating.
Posted by aebarschall at 3:26 PM No comments:

A copy of my comment from Judge Posner's recent blog

Here in the USA, we live in an environment where traditionally there have been patents and copyrights.  This legal tradition has encouraged a culture where innovation is valued, because innovators have reaped the rewards of innovation.  In cultures where innovation was not rewarded, innovation was not valued in the same way.  As a result of the culture established here, due to strong intellectual property protection, the USA has traditionally had the best science and engineering in the world.

First, those software people worked in this culture that had engrained encouragement for innovation that came from our history of intellectual property protection.

Second, there was quite early on a strong move for at least copyright protection to help out those innovators.  Early copyright cases quickly started talking about protecting "structure, sequence, and organization," to try to extend protection as broadly as possible.  This was a bit of a stretch in the law, but it showed a recognition of the importance of rewarding those who created economic benefit to the country.

Problems with software patents have continued because at first the United States Patent and Trademark Office refused to hire patent examiners with a computer science background, so poor art searches were performed.

More problems have been created because the original Supreme Court  case on this topic, Gottshalk v Benson, has severe logical flaws and a nonsensical result.  I encourage people to read my brief in the Bilski case for more discussion of that.  My brief is up on my blog.

The nonsensical opinion in that first case has resulted in extensive legal uncertainty and much litigation, leaving the entire field of patent protection for software unsettled for almost half a decade.

Patents need to be whole heartedly endorsed by statute and the entire line of cases stemming from Gottshalk v Benson needs to be overturned.

Moreover, the idea that mathematics is not an invention also needs to be overturned.
Posted by aebarschall at 11:15 AM No comments: