I wrote this paper before the Bilski decision, and have made some updates, but it does not include the most recent round of cases between the Federal Circuit and the Supreme Court. 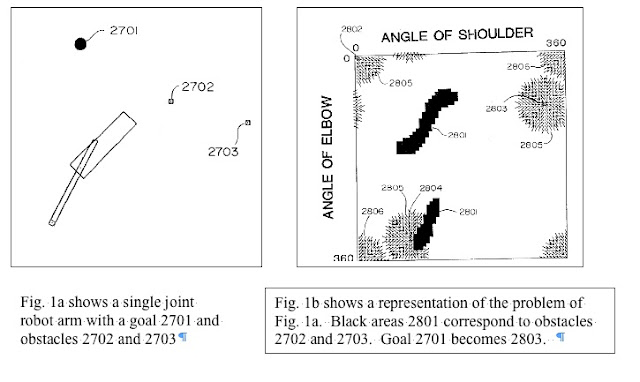 These are only a small sample of the many figures in the patent.  The discussion here will not attempt a complete explanation of the algorithm of the invention, which would be better understood with reference to the original patent.  The effort here is only to give a flavor of what was involved, that any given problem might have a very peculiar internal representation.
In this patent, the representation space, e.g. Fig. 1b, is searched methodically to find an optimal solution.  Arrow masses 2805 and 2806 show a stage in that search  As the algorithm proceeds, the arrows gradually expand to fill the space – ultimately yielding an exhaustive search, so that the final solution can be taken to be optimal.
While the solution may look mysterious to the uninitiated, in fact there is a very clear, logical way in which the solution technique relates to the problem to be solved – and the search is exhaustive, and therefore, in some sense, deterministic.
In other words, this algorithm might satisfy the befuddled student with Asperger’s Syndrome unpacking boxes described above.  If a proper representation of his box unpacking problem were to be devised, it could be searched with A* to yield the best solution that he hoped for.  He might then be absolutely guaranteed that he would not unpack his books before he found the disassembled pieces of the book case he hoped to put them in, for instance – or perhaps he would be guaranteed that he would find his change of underwear that he needed the next day before unpacking the text books from last semester, which he might not need again for many months, if at all.
The search for a provably optimal and complete solution to a problem also bears a resemblance  to the Napoleonic attempts at codification, the idea that a solution might be found that would eliminate further searching, that would in some sense be complete or final.  The certainty, predictability and completeness of the solution here further reminds the author of Judge Dyk’s desire for finding a test for obviousness that would be more predictable, in other words prevent litigation by helping litigants foresee outcomes.
GENETIC ALGORITHMS
Genetic algorithms fall into a less certain way of coming to some kind of problem solution.  In this approach, each proposed solution to a problem is represented as a string of computer characters[xlix].

The algorithm treats these strings like DNA.  Each number is regarded as a piece of a “chromosome.”  The chromosomes go through a mating process similar to what would happen to
DNA in biological cells 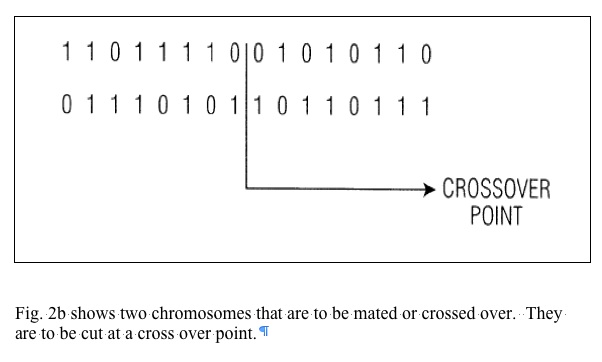 The algorithm cuts the strings as shown in Fig. 2b[l] and crosses the portions from different strings as shown in Fig. 2c[li] to yield two new strings, representing two new proposed solutions to a problem.  .  The example here is fairly simple, with short strings and only one crossover point.  Practical examples might be much more complicated.
The resulting strings, i.e. the new representations of a problem to be solved, can then be tested with respect to some criterion to see which represent better solutions to the problem.  The better ones are retained and the lesser ones are discarded, analogously to Spencer and Darwin’s “survival of the fittest”[lii] concept.  This process is repeated until some threshold is reached.
Genetic algorithms do not pretend to find a best solution to a problem.  They only provide “better” solutions – and then only in some problems and not others.  The crossover points chosen might bear little or no relationship to the problem to be solved.  The resulting crossed over strings might in some cases give rise to a solution that is completely dysfunctional.  Whether the solutions are improving due to the mating type process is something that can only be determined by experimental testing.  Yet, researchers in this field find that sometimes solutions are improved by the genetic process.[liii]
For those who believe in evolution, this process would appear to be similar to the method of improving life forms to be found in nature.  In fact, in nature, many organisms appear that are not at all viable, that are stillborn or die quickly.  Yet, over time, organisms come into being that do survive and even thrive.
The genetic algorithm process differs from the A* process in that the internal representation of the problem, the chromosome-like string, need not be clearly related to the structure of the problem to be solved.  The only real proof that the process works is empirical, based on experiments.  There may be no logical justification for the result.
This process could not be very satisfying to the deterministic thinker with his boxes in the college dorm room.  Indeed, the appearance of dysfunctional solutions could be very distressing.  Yet, over time, some “better” or “good enough” solutions often manifest with genetic algorithms.
This process could not be very satisfying to Napoleon either, since it involves repeated trials to come to a solution, is not very predictable, and sometimes does not work.
Presumably, also, this type of process would not be satisfying to legal scholars, like Judge Dyk, who seek predictability.
NEURAL NETS
The Schaffer et al. patent used genetic algorithms to design another artificial intelligence type, the neural net.  The neural net attempts to mimic the way some scholars think neurons operate in the brain. 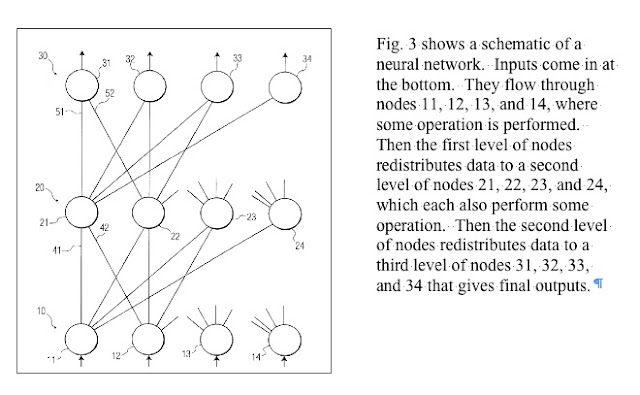